The Power of Print 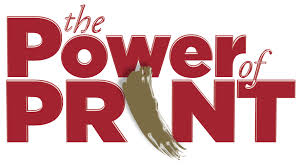 01 Oct The Power of Print

Posted at 16:22h in Design by martin
0 Likes
Share

We live in a digital age. It’s a fact that no one can argue. However, during the dawn of this digital age a few other articulations are also true.

So, for the 2015 Mr. Magazine™ Manifesto, I opted to remind folks of some other thoughts to consider.

1. Audience first. That was, and will continue to be the first mantra of media, magazines in particular. Audience, rather than platform, should always be first.

2. Audience is not always right. Audience first is not audience right. We need to be reminded with what service guru and restaurateur Danny Meyer says, “Forget ‘the customer is always right’ …The customer must always feel heard.”

4. Technology does not kill print. It’s neither technology nor its digital components that threatens the survival of printed magazines. The perpetrators are the people behind print, its content and the investment or lack thereof. Remember the old adage, “Guns don’t kill people; people kill people.”

5. Advertisers are not departing print. Some magazines in 2014 published their largest issues since their inception. More ad pages mean bigger magazines than ever. When you hear some ad agency folks declaring that “we have no customers walking into our office and asking to place their ads in print,” ask them who their clients are and what about those pages and pages of ads in print? Are they representing the wrong clients?

6. New printed magazines are thriving. Since the dawn of the digital age (desktop publishing) in 1984, more print magazines have started. Did you know that some of the most successful magazines in the country are less than 30-years old? Men’s Health, InStyle, Marie Claire, Food Network magazine, O The Oprah Magazine and ESPN are just a few.

7. Without new magazines, the industry is dead. Any industry that fails to introduce new products is a dying industry. We should pay more attention to the business of new print launches and cherish and celebrate their arrivals. The industry must also focus on the fact that these infants always give us hope and a reason to believe in the future.

8. Learn from digital. More digital and online companies have discovered print in the last few years. From Web MD to Cnet, they’ve all have opted to produce print magazines in addition to their digital presence. Those digital companies are in the business of “no customer left behind.” A good mantra to follow.

10. Statistics lie, numbers don’t. When you hear the statistics and percentages of increases or decreases in a particular publishing area, please do me a favor. Ask for numbers, real numbers. One percent of a billion-dollar industry is larger than fifty percent of a thousand-dollar industry.

Last but not least, it gives me great pleasure to mention that the same people who promoted and used the phrase the death of print from 2009 to 2014 have revised their phrase and predictions. Their new slogan is now the decline of print. Give them five more years and they will swallow their pride, admit they were wrong not once, but twice, and their new phrase will be the power of print.

Editor’s Note: The Mr. Magazine™ Manifesto 2015 was first published in the Jan. 5 issue of min: media industry newsletter: The authoritative media/marketing newsletter since 1947. In the Dec. 22 of min, the editor in chief Steve Cohn wrote, “This issue, min’s last for 2014, extends our 28-year tradition of magazine launch reviews with Dr. Samir Husni. When we return on January 5, 2015, Husni will present his fifth Mr. Magazine Manifesto of New Year’s resolutions. He knows which titles have been naughty or nice.” For more about min newsletter click here.